Shadow of the Skye by Casey Wullner

As the 9th installment in the Paved in Skin (Feminine Divine) series, from the Isle of Skye comes “The Shadow”, Scathach. Though her tales now mostly lost to time, appearing only briefly in the Ulster Cycle of Irish mythology, the shroud of mystique that surrounds her today seems all to fitting for “The Shadowy One”. As a teacher, warrior, prophet and magician, she was so revered amongst the living that she would ultimately rise above her own mortality to become the Celtic goddess of the dead, guiding all who die in battle to Tír na Nog (the Land of Eternal Youth).

Her fiery read hair casting doubts shadow into even the most fearless of foe. The hearts of countless men pierced by her deadly Gae Bolg spear, only her green eyed gaze might be more prolific. Though scantily clad in only her Isle of Skye colors and a few leathers and furs, should she wear nothing at all but the blood of the slain, she would not be less appropriately dressed to do battle. 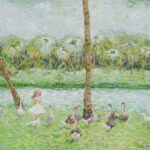 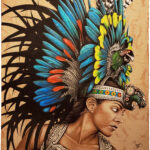